On December 7, 1941, two of the six men (if we count founder John Alexis Edgren) to serve as president of Bethel happened to be in Chicago. It was a Sunday, and a young Carl Lundquist and twenty other Bethel Seminary students were wrapping up a four-day seminar by preaching in local churches.1 Arvid Hagstrom, who spent his first non-presidential year since the beginning of World War I commuting between Minnesota and Illinois, also filled a Second City pulpit that morning. His diary entry for the day is mundane, save for a final comment:

Japan bombed several of our warships and killed many men at Hawaii and Pearl Harbor, thus declaring war on U.S.A. God pity them and us all.2 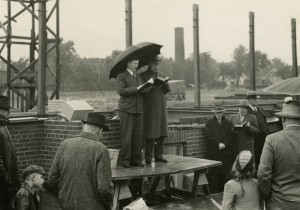 We don’t have much eyewitness testimony about the immediate response of Bethel students and employees that day, but according to historian V.R. Cardozier, the campus mood around the nation was predictably somber: “…students were confused, gloomy, and disbelieving. It could not happen! The implication for college men was clear; they would sooner or later likely be called to military service with the specter of combat and possibly death looming in their future.”3

If Bethel students, like most others, were “simply stunned,” the prospect of war can’t have been too far from their minds. Just four years before, when Japan invaded China, the editors of Bethel’s student newspaper, The Clarion, had complained that Bethel was “silent on these vital issues.”4 But in late October the prominent University of Minnesota historian Harold Deutsch had visited Bethel to speak on “The Changing Scene in Europe,” and earlier that month the student newspaper, The Clarion, began publishing letters from alumni in the military, starting with Pvt. Victor Osterman’s report that the Army Air Force was “…perhaps the most interesting phase or department of the whole defense set up, and yet it can be the most boring if the individual’s outlook is not sympathetic.”5

These days there comes to our minds and hearts once more a sanctifying calm as we together think about that “Night of nights, so pure, so holy, mother of a happy Christmas morn”, when that “sweet peace hung o’er a village lowly where our Savior, Jesus Christ, was born”. And then we are startled from our sweet reverie by the rude shock that the world is on fire, and burning near our very shores.6 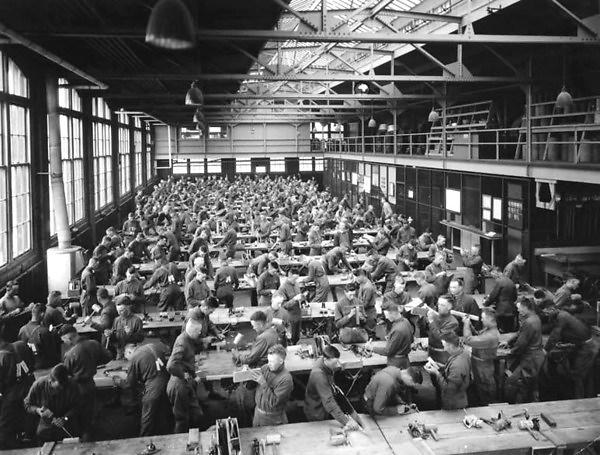 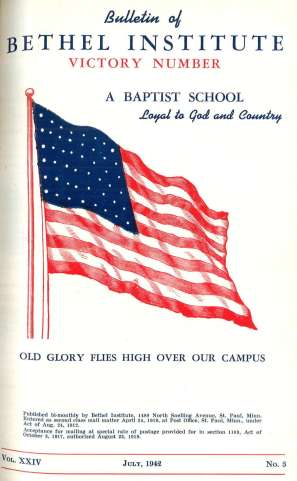 Student life became more than dances, for the duration, at least. Inquiring reporters found a different temper on prairie campuses where students had once lounged “in a timeless world of soft drinks and juke boxes.” Something of the blithe spirit was gone; coeds as well as servicemen had grown up rapidly. Student members of college war councils assumed responsibility as air raid wardens, salvaged paper, sold bonds and bought stamps, rolled bandages, sent letters and school papers to thousands of alumni overseas, and did the innumerable tasks of war on the home front. The American college was “converted” to war not quite as thoroughly as industry and its reconversion was less rapid and complete. The path to war was marked by the scarcity of cokes in college snack bars, the prevalence of uniforms in classrooms and armed guards before laboratory doors, professors of Greek and art struggling with classes in mathematics and physics, the curtailment of “weekends” and the disappearance of the long summer vacation, the expansion of colleges of medicine and engineering, the shrinkage in schools of commerce and graduate studies and the virtual disappearance of those of law. — Mary Watters, 19517

Schools as small as Bethel Institute (its name until 1945) and as large as the University of Minnesota could hardly escape the effects of history’s largest war, one that enrolled sixteen million Americans in the military and had profound implications for how the other 116 million worked and worshipped, ate and traveled, taught and learned.

Much of the impact was felt retroactively, thanks to the G.I. Bill and other legacies of wartime. (“We now realize that World War II marked the end of one era and the beginning of another,” proclaimed Carleton College president John Nason in 1970.8) But while “College and universities were somewhat insulated from much of the stress of wartime” and planning for education was more cohesive than it had been in 1917-1918, the conflict created significant pressures for all institutions of higher learning.9

The most pressing concern, of course, was that college enrollment would be decimated as draftees were called up and others (male and female) in the suddenly patriotic student population volunteered for service. (There was significant social pressure to enlist, according to Cardozier: “On some campuses,” for example, “some young women refused to date young men not in uniform, in the belief that it was patriotic to spend their time with those who wore uniforms.”10) Already in fall 1941 the national number of male students was down 8% from the year before — less because students had joined the military than because they took high-paying manufacturing jobs. (Even before Pearl Harbor, war industry was gearing up, to prepare for American participation and to help supply the British, Soviet, and Chinese war efforts through Lend-Lease.) That figure dropped another 15% by the beginning of the 1942-43 academic year, but that was actually a smaller drop than what had happened during WWI, when the fall 1917 enrollment was over 20% down from 1916.11 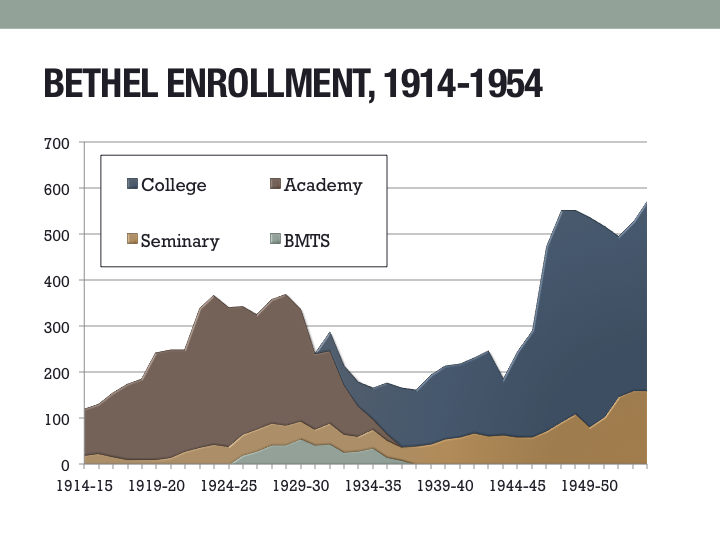 Bethel’s enrollment in the forty-year period separating the move to St. Paul from the beginning of Carl Lundquist’s long tenure. Partly because of the Seminary, Bethel’s overall enrollment dip during WWII was relatively modest — and enrollment jumped significantly after the war, thanks in part to the educational benefits contained in the G.I. Bill. (BMTS = Bible and Missionary Training School, a short-lived program that offered lay people some training in Bible, church history, evangelism, and other fields.)

But as the war dragged on and the military’s need for manpower increased, enrollment decline became a serious problem. By the beginning of the 1943-44 year, enrollment was not quite 70% of what it had been in 1939-40. Minnesota was particularly hard hit, with its schools enrolling only 58% of their 1939-40 population by 1943-44. In part, that probably reflects the state’s high number of small private colleges, which generally suffered more than state schools. Just from fall 1942 to fall 1943, male student enrollment at church-related colleges fell by 60%. 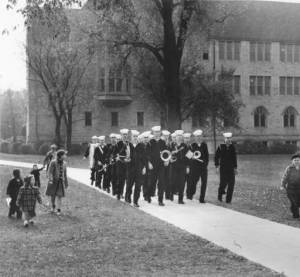 The band of the Navy V-12 program at St. Thomas, 1945 – Courtesy of the University of St. Thomas Archives

Larger institutions like the University of Minnesota had some enrollment protection in the form of on-campus military training programs set up by the Army, Navy, and Army Air Force — all of which featured heavy doses of math, engineering, and physical training.Two of Minnesota’s Catholic colleges did participate in the war in this way: building on its long relationship with the military, St. Thomas was one of the 131 schools to have the Navy’s V-12 program, which prepared college students for officer candidate school; St. John’s avoided the debilitating enrollments felt by most male-only schools by hosting 1,500 members of an Army Air Force training detachment. Facing dramatic losses of male students, Hamline (just down the street from Bethel) resorted to offering courses in subjects like pilot training, X-ray technology, engineering, and occupational therapy.12

(Bethel did host the Navy’s V-1 program in the fall of 1942, but Pres. Wingblade complained that “the whole situation is subject to such drastic changes by orders from Washington that it makes it somewhat difficult.” After only a handful of new applications came through, the program was suspended, but later that year Wingblade inquired into the possibility of the Seminary hosting the V-12 program, like St. Thomas.13 As an April Fool’s joke in 1943, The Clarion published the headline “Navy to Take Over: Bethel Will Be An Overflow From the U. M.” The gag story “quoted” the president’s brother, Prof. A.J. Wingblade: “I don’t fully understand the necessity, but it seems that the U. of Minnesota must enlarge its quota for naval training.”14)

Before December 1941, about two in five American college students were women; within two years, women accounted for five in eight of the same population. At the same time, a significant number of young women did put their studies on hold during the war. Nationwide, the female student population dropped nearly 12% from 1939-40 to 1943-44, in part because of enlistment in the military’s auxiliary services (WACS, WAVES, etc.) but more so because women took manufacturing and government jobs. Such work, observes Cardozier, “was often exciting, it provided many young women unprecedented levels of income, and it was patriotic, which meant that some young women whose families would not previously have permitted them to work away from home allowed them to do so.”15 And those women who stayed in school sought to support the war in other ways, as at St. Catherine’s, the Catholic women’s school in St. Paul:

The desire “to do something” to assist in the war effort, the temptation to take jobs in the defense industries, became more insistent. As a result nearly eighty students withdrew during the academic year. But after the initial shock, life on campus settled into the serious business of study, prayer, and home-front co-operation in the world-wide struggle then going on. In January, 1942, a board of defense was created at the college to supervise and synchronize the whole gamut of war-related activities, from stamp and bond sales, blood donations, classes in first aid and nutrition, to spiritual endeavors.16 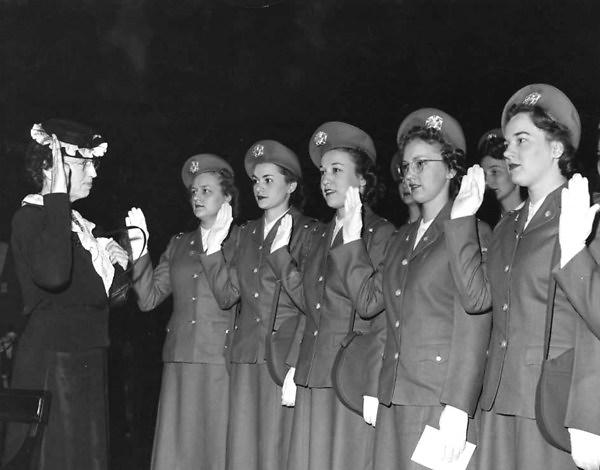 Like the First World War, the Second affected Bethel somewhat less than its peers. But this time far more people from Bethel took part; with Bethel now a junior college rather than a high school, more students were eligible for military service, and others worked in war industries or non-combat roles. Bethel’s denomination pushed for its pastors — many of whom had graduated from Bethel Seminary — to serve as army and navy chaplains. Campus demographics shifted: by 1943-1944 women accounted for upwards of 70% of a much smaller college student body, one that also enrolled several students of color for the first time. The same mix of emotions that historian Merrill Jarchow found at other Minnesota private colleges was present at Bethel: an “understandable melancholy, anxiety, and uncertainty, but also a sense of unity.”17

And even if the curriculum didn’t shift as drastically as it did at other schools, new questions bubbled up and old ones took on new urgency, as the people of Bethel wrestled with the implications of total war.18  For those on the front lines, questions of life and death, suffering and purpose ceased to be classroom abstractions. Meanwhile, those on the home front experienced loss, fear, hope, and anger in their own ways, as Bethel student (and future political science professor) Walfred Peterson observed in a touching Clarion piece set in St. Paul’s bustling Union Depot:

How strange that the voice that says, “Train arriving,” or “Train leaving,” can cause so much emotion. Just one voice. I would not like to be that voice.19

And in the end, the war proved to be a landmark in Bethel’s history. It unleashed new energies that reshaped Bethel into a much larger, more complicated institution, and it fed a burgeoning sense of self-confidence and global mission among the people of the (no longer “Swedish) Baptist General Conference.

1 The Bethel Clarion, Dec. 5, 1941. That group of seminarians also included V. Elving Anderson, later to serve as professor and dean at Bethel before moving on to a brilliant career as a geneticist at the University of Minnesota.

18 Though some courses were offered less often due to faculty being ill or in military service, analysis of Junior College catalogs for the period reveals no significant changes.