In late 2001, in the wake of the September 11 terrorist attacks, the United States launched a ‘global War on Terror.’ President Bush, outlining one of the defining features of the War on Terror in a September 2001 speech, noted that “[o]ur ‘war on terror’ begins with al-Qaeda, but it does not end there. It will not end until every terrorist group of global reach has been found, stopped, and defeated.”¹ Over the next decade, United States military forces, sometimes in concert with allied nations, other times alone, invaded Afghanistan, Iraq, and launched military operations, troop deployments, and drone strikes around the world.

The War on Terror eventually grew to encompass not only the Middle East, but the Horn of Africa, the Philippines, Saharan Africa, and crucially, America itself. Ever-increasing security at airports, border crossings, sporting events, and innumerable other places has marked the domestic experience of the War on Terror. Beyond physical intrusions, the War on Terror has been used to justify the ever-broadening electronic surveillance of American citizens, and in recent years, the War on Terror’s arena has moved into cybersecurity almost as much as physical security.

In light of these developments, the War on Terror’s coherence as a concept is difficult to sustain. Even as critics like the political scientist Francis Fukuyama have noted that ‘terror’ is not an enemy but a tactic, the war itself has morphed beyond its original definition; President Bush used the phrase aggressively in the early years of the war, but by 2007 had moderated his usage. President Obama has sought to downplay the phrase even further, preferring to refer to War on Terror actions as “Overseas Contingency Operations.” Yet rhetorical shifts aside, there has been no real break between the war President Bush began in October 2001 and the operations that continue around the world. And as late as October 2015, U.S. troops are slated to remain in Afghanistan through at least early 2017, lending an additional chronological complexity to the war; unlike the other wars examined in this study, the War on Terror has not ended, nor does it show signs of abating, even after fourteen years.

In spite of the war’s longevity (it is now America’s longest war), the War on Terror generated comparably little discussion, reflection, or dissent at Bethel College. After a brief flurry of reaction to September 11, students uniformly ignored the developing War on Terror until the leadup to the invasion of Iraq in early 2003. By the fall of 2004, the war was largely gone from Bethel’s campus and did not resurface again, in spite of an ever-changing global landscape. Accordingly, this study focuses only on the first few years of the war.

This comparable paucity of documentation is partly a source problem. While the Vietnam War occurred in the full flower of history — an era when documents were created on paper, carefully filed, and more or less preserved intact for future generations — the War on Terror, in spite of its historical nearness, took place in a digital void. By the early 2000s, most of Bethel’s various organizations were producing born-digital documents with the inherent fragility that entails. Documents from Vietnam were filed in folders and boxes; files from the War on Terror were simply deleted. Thus, while Vietnam produced a full range of sources — among them the President’s annual reports, Conference Annual Reports, Student Senate and Faculty Senate minutes, Clarion, Coeval, and Spire, not to mention the invaluable physical records pertaining to Conscientious Objector students and various surviving ephemera — the War on Terror produced the Clarion. In other words, the Vietnam section of this project was composed in light of over seven inches of physical files (not counting the many thousands of pages which were accessed digitally through Bethel’s Digital Library) while the entire War on Terror narrative draws on less than one-quarter inch of documents.

The digital void is not necessarily catastrophic in itself. However, the lone source for this era — the Clarion — suffered from the digital turn as well. While the Vietnam Clarions featured twelve to eighteen pages of full text, journalistic articles, perhaps one small cartoon, and a half-dozen illustrative photos, the War on Terror counterparts contain, over average, less than half of the text — a byproduct of a generation whose media habits were increasingly shaped by the graphically-driven internet. By the mid 2000s, the Clarion had fully transitioned to the post-text era in which graphics, images, and layout took on paramount importance. The text itself was relegated to a secondary role, and accordingly suffered from poor conception, editing, and proofing. The Clarion has improved in recent years, but its quality remains marginal compared to the early 1960s newspaper. 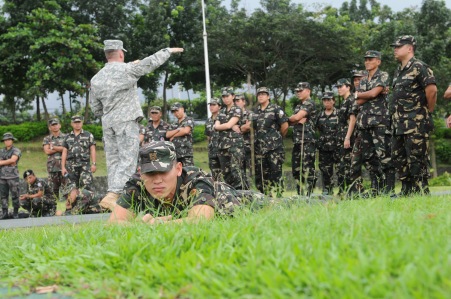 But more importantly, the war had a comparably slight impact on campus because the War on Terror was and is an entirely different kind of war than the other wars this project has examined. I’ve noted before that World War I and World War II affected the lives of ordinary citizens in unprecedented ways. Beyond the need for soldiers and the ensuing draft, the national economy was almost totally mobilized for wartime production. Vietnam represented the first move away from such a total war, although the draft forced the war to continued relevance. And if the national economy did not mobilize like it had done earlier in the century, the Vietnam War provoked a seismic shift in domestic politics, unleashing social forces that reshaped a generation.

The War on Terror did none of these things. Beyond the increased security measures and surveillance of civilian populations, the War on Terror was dichotomized into two drastically different experiences, one domestic and one foreign. American soldiers experienced the foreign aspects of the war, and in this respect, the War on Terror bore exactly the same kind of psychological and physical costs of previous wars. In the domestic realm however, the war was entirely subsumed into partisan politics. The domestic was finally, after a century’s progress towards that status, fully severed from the experience of war and its costs, deprivations, and sacrifices. (Accordingly, the language of “homeland” emerged as a non-martial substitute for the older “home front.”) In other words, the war had virtually zero effect on the daily lives of those American citizens who were not involved in the military in some capacity (the vast majority of Americans) and to the extent the war was an issue of contention, it was negotiated in purely political terms.

Thus, at Bethel, to be Republican was to be pro-war and to be Democratic was to be anti-war (and vice-versa). The war ceased to matter qua war and took on importance only insofar as it functioned as one of the many arrows in the slings of partisan warriors. To debate the war was usually not to debate broader issues of justice, revenge, power, and proportionality; it was to bruise the enemy across the partisan aisle. Operating out of a framework wrought by the New Right politicization of evangelicalism of the 1980s and the culture wars of the 1990s, only a few students ever (occasionally) transcended that framework.