How typical was Bethel’s experience of the century of modern warfare that started in 1914?

While we’ll stay fairly close to Bethel for the project itself, early on in my research I’ve been dabbling with the history of some of Bethel’s peers: neighbors in the Twin Cities and other Christian colleges. So today I’ll kick off an occasional series looking beyond Bethel.

Not surprisingly, the state’s land-grant university was the institution of higher learning most significantly affected by the war. The University of Minnesota’s German department came in for investigation by the state’s overzealous Commission on Public Safety, but like most American scholars, the university’s faculty generally supported the war. U of M historian John Gray reports that, among others, three deans and nearly five dozen professors of medicine went into military or government service. Despite such losses, political science professor Cephas D. Allin exalted that “We have the opportunity of a life time now to strengthen the teaching forces at the University, because the eastern institutions have been so badly hit by the war” (quoted in Carol S. Gruber, Mars and Minerva: World War I and the Uses of the Higher Learning in America, p. 103n). While many students also enlisted, their places were filled by six thousand draftees enrolled in the university’s makeshift branch of the Student Army Training Corps (SATC). (It was a rough transition: courses were developed almost literally overnight, and one administrator estimated that one-third of these student-soldiers weren’t “college material.”)

Local private colleges were also affected, with most experiencing reduced enrollments and watered-down curricula, the challenge of setting up SATC units, and the death and wounding of faculty, students, and alumni. A key source here is Carleton College professor Merrill Jarchow’s 1973 survey history of Minnesota’s private colleges, commissioned by the Minnesota Historical Society. Bethel appears only in the last of Jarchow’s three parts, covering 1940-1970, presumably because it didn’t add even a junior college until 1931.

Just south of Bethel, Hamline sent nine faculty and about 350 students and alumni into the military (with five dying), and three dozen more volunteers formed an ambulance corps that served with the French Army. Further down Snelling Avenue, Macalester College had been divided by the approach of war. In February 1917, eighty-seven students praised the pro-neutrality members of Minnesota’s congressional delegation for “resisting the pressures to force the country into war,” while all but three faculty members signed a telegram to President Wilson “urging active participation in the conflict.” (Jarchow finds that dissent evaporated when war was declared that April. The college’s WWI memorial plaque names eight honored dead.)

A mile west of Macalester, the Catholic diocesan school named for St. Thomas Aquinas had adopted compulsory military drill in 1903 and was the largest private military academy in the country by 1911. In November 1916 the War Department made St. Thomas one of only six colleges in the country that could send its graduates in ROTC, with a senior division of that corps on campus by early 1918. All told, St. Thomas contributed sixteen faculty and over 1000 alumni (three hundred officers) to the military, nineteen of them dying in the war. 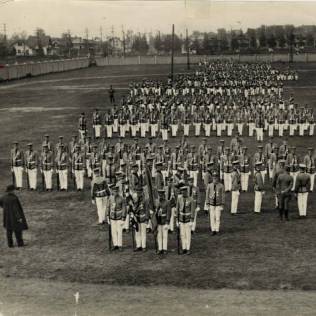 The founder of St. Thomas, Archbishop John Ireland, reviews cadets in 1917 – Courtesy of the University of St. Thomas Archives

St. Thomas cadets parading through the streets of St. Paul, Minnesota in 1917 – Courtesy of the University of St. Thomas Archives