Can You Help? A Community Invitation

July 2, 2014 · by Fletcher Warren · in Announcements, Background and Methodology, War on Terror · 7 Comments

If you’re coming here via the Bethel News channel, I’d like to encourage you to read about how you can contribute to this project by filling out a survey.

Until now, I’ve spent most of my time researching on the Vietnam War. As we move into July, I’ll be focusing increasingly on the War on Terror. Doing so will be something of a change of pace. While Vietnam has a literature covering protest and support movements, the role clergy played in justifying and condemning the war, and many other aspects of the war, the War on Terror has a comparatively limited literature.

I suspect this is partly due to the proximity of the war – 9/11 was only thirteen years ago, barely a historical blink – but my initial research suggests that this is not the only reason sources are so scarce. 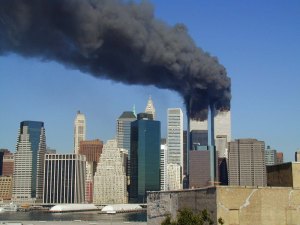 While Vietnam saw a draft, the War on Terror has been, and continues to be, fought with an all-volunteer armed forces. There has been no national mobilization for the war effort, and the American citizenry has been relatively uninvolved in the waging of this war. And if the war has had little effect on broader American life, it has had still less of a systemic impact on colleges and universities. Aside from the administrative adjustments needed to comply with federal legislation such as the 2001 USA PATRIOT act and increased federal funding of certain scientific research areas with weaponization potential, my initial impressions are that the war produced very limited institutional changes.

Of course, war does not have to drive significant institutional change for it to have an impact at a school like Bethel. Equally important are the social and cultural changes and debates the war provoked. And I suspect that unlike Vietnam – which happened long enough ago to make connecting with former employees and alumni difficult – it’s realistic to attempt a social and cultural history of the War on Terror at Bethel.

But to do that, I need your help. Publications like the Clarion can only go so far in illustrating the climate on campus during those years. Far better are eyewitnesses to the events – alumni and Bethel employees; that includes faculty and staff, current and retired.

As Chris and I noted in the project proposal, we’re most interested in three questions:

1) How did people from Bethel participate in the war? 2) How did the war shape life at Bethel itself? 3) During each conflict, how did people at Bethel understand and respond to the sometimes competing demands of national solidarity and Christian commitment? 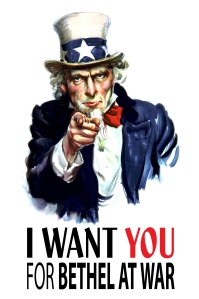 I’m especially interested in learning more about how the campus reacted to the news that Muslim terrorists were behind the events of 9/11. Did the campus see anti-Muslim activity or sentiment? How did students and faculty wrestle with the relation between their faith and their citizenship as the country entered two wars?

As the man to the left says, I want you to help us with this project.

If you would like to share your story, there are several ways for you to do this. Most immediately, leave a comment below or email us at bethelatwar@gmail.com. I’m also interested in conducting some low-key oral histories. We would meet, you would talk, and I would ask a few questions to clarify or expand points of interest. Meetings could be as short or as long as you wish. To set up a meeting, send us an email!

If you’re new to Bethel at War, stop by our About page to learn more about the project, then browse the blog to see what Chris and I have been up to.

And if you were around Bethel during the Vietnam years, prove my earlier assumption wrong! I’d love to hear stories and recollections from that war too.

← On Loyalty and Fundraising
“100 Percentism”: Nativism in WWI America →