“The Kid in Upper 4”: Further Thoughts on Bethel Fundraising during WWII 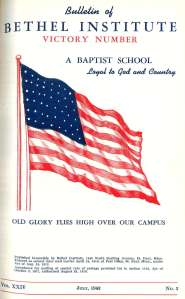 The July 1942 “Victory Number” of the Bethel Bulletin

Earlier this month I noted how “as the [Second World] war went on, ‘Loyalty’ began to be used in Bethel publications in such a way that loyalty to country and loyalty to God were put in service of loyalty to Bethel, and its desire for better facilities.” Starting in late 1942, the prewar practice of designating February as “Bethel Loyalty Month” was bedecked in patriotic imagery, linked to America’s war bonds campaign, and put in service of raising funds for a new men’s dormitory.

Another example of how Bethel fundraiser-in-chief Wyman Malmsten repurposed wartime rhetoric came in the fall of 1944, when the Bulletin of Bethel Institute published a “Victory Special.” Perhaps trying to capitalize on the growing sense that an Allied triumph was inevitable — German officers had attempted to assassinate Adolf Hitler, Paris had been liberated, the Red Army had reached East Prussia, American island-hopping in the Pacific had reached Guam and the Marianas — Malmsten showed four examples of “Victory” on the cover of the September-October 1944 issue. Oddly, none of them had anything to do with the war. Instead, the Bulletin trumpeted Bethel’s victories in maintaining attendance, promoting the men’s dormitory campaign, and nearing its 75th anniversary. The highest victory, of course, was spiritual:

The prayer life and faith of the faculty and student body create a deep sense of responsibility for the spiritual welfare of each member of the Bethel family and victory after victory is claimed in the lives of our student body that only eternity will reveal.

I think that the most interesting fusion of Bethel fundraising and wartime propaganda, however, came a year earlier. The short November 1943 issue of the Bulletin was dedicated solely to promoting the men’s dormitory campaign, which by that point had raised $20,000 — with a June 1945 goal of $75,000. As before, Malmsten encouraged supporters of the school to buy war bonds and war stamps and share them with Bethel. What’s most striking about this issue, again, is its cover:

Cover of the November 1943 issue of the Bethel Bulletin

Here the Bulletin simply reused a famous railroad ad from 1942, designed by Nelson Metcalf, Jr. Military needs wreaked havoc with the civilian experience of trains, as explained by a Baltimore Sun reporter in a 2001 profile on Metcalf’s ad:

Special trains to racetracks and sporting events, for instance, were canceled as were extra trains to summer and winter resorts. Dining cars and Pullmans were eliminated and replaced on some trains by work-a-day commuter coaches. Anything that could roll or pull a train, did.

Trains were often late and passengers had to stand in the aisles. Pullman space or a meal in a dining car became a vanished pleasure, another casualty of the war. Railroads were naturally bombarded with complaints from unhappy passengers.

Metcalf took on the challenge of turning around public opinion about one particular company, the New Haven Railroad, as he explained in 1991:

In 1942, Madison Avenue almost ignored the deep, gnawing worries on people’s minds – the mounting casualty lists, the haunting fear of losing a friend or loved one in the war. But an ad on troop transportation opened the door to pay tribute to the most important person in many people’s lives… the man who was going to war. His thoughts, his feelings. What it was like to be leaving the USA for war. And why railroads must put his interest first, even at the expense of civilian passengers.

A pioneering example of the advertising “strategy of deflecting negative attention away from a product or service,” according to semiotics scholar Marcel Danesi, Metcalf’s strategy “worked beyond expectations,” with rail use increasing after it appeared and the ad then used to sell everything from war bonds to… a fundraising campaign for a small Baptist junior college in Minnesota seeking to provide comfortable sleeping accommodations for young men.