“That’s one small step…”: The Moon Landing as Public Theology

July 24, 2014 · by Fletcher Warren · in Background and Methodology, Tidbits from the Archives · 2 Comments

Paging through the Standard from 1969, I came across an interesting article by editor Donald Anderson titled “Moon Reflections.” And while I’ve missed the 45th anniversary of the moon landing by a few days, it’s still an interesting tidbit — one that also happens to illustrate a trend I’ve noticed in the Standard.

It’s a well-known story:  after a four day journey of nearly 250,000 miles, astronauts Neil Armstrong and Buzz Aldrin left their compatriot Michael Collins in the orbiting command module and, after a short flight, alit upon the lunar surface on July 20th. After some hours of rest and preparation, Armstrong became, on July 21st, the first human to walk on the moon. The event was broadcast live via television to a watching world — provoking disappointment in the Soviet Union and elation in the United States.

Not every American was enraptured by the historic event, however. One at least, felt somewhat peevish about the whole affair:

President Nixon said the days the astronauts took to reach the moon and return were the greatest week in the history of the world since creation. Some people, with a different theological orientation than the President, may suggest that the week of the crucifixion and resurrection of Christ is more important to mankind than reaching the moon… — The Standard, August 25, 1969

Anderson’s reaction was not without parallel, as Devin Manzullo-Thomas, a professor of history at Messiah College, notes on his blog, The Search for Piety and Obedience. John Zercher in an editorial for the Evangelical Visitor (the denominational paper of the Brethren in Christ), using words that closely mirror Anderson’s, also drew an unfavorable comparison between the week of the moon landing and events on the Christian calendar:

I have not quite gotten over it yet. … One can understand President Nixon being somewhat carried away by the entire affair when he called it the “greatest week since creation.” Those who believe in the historical character of the Christian faith can recall several weeks whose significance surpasses this one… — Evangelical Visitor, August 11, 1969

The rest of Manzullo-Thomas’ post is well worth reading — he notes that other evangelicals responded to the moon landing in a variety of ways, both by appropriating the event as a uniquely Christian achievement or by viewing the accomplishment in eschatological terms.

But Anderson’s editorial is also a clear demonstration of a phenomenon I’ve noticed countless times during my research in the Vietnam-era Standard. It’s a simple rhetorical strategy: the author picks a recent topic or event of interest to broader society (which in this era might be the Berkeley riots, hippies, the increasing urban crime rate, or even the moon landing), writes a few sentences on that topic to hook the reader’s attention, and then switches abruptly to his or her real topic of interest — spiritual conversion or formation. The moon landing editorial provides a few choice examples:

It took two and a half seconds for a radio signal to go from Houston to the moon and return; God can hear a prayer and answer in less time.

Scientists fear contamination of the earth by moon germs, and we can be grateful for the astronauts precautionary three-week isolation period. A contamination emanating from the human heart knows no quarantine and has never been successfully expunged by man; God alone has the remedy.

More often than not, the transition amounts to little more than a non sequitur, and today of course, the examples read as forced and overly didactic. But they do reveal the most basic concerns of Conference Baptists which were nearly always spiritual, not political or social (recognizing, of course, that these areas often overlapped). If a contemporary event could be used to segue into a spiritual — and especially salvific — message, Standard writers took the opportunity. Those extra-denominational events were not important to Conference writers as events with real social and political implications, only as vital components of a chosen method for more effectively communicating with Conference laypeople and ‘the lost.’

To the historian, the practice is frustrating. Often, an editorial or article will have a promising title — “Shall I Burn My Draft Card?” for example — but once read, actually reveals very little of the author’s stance on the title subject. At best, the title subject will appear only in the first paragraph (with little or no editorial voice; informational only) or in the manner of a sermon illustration somewhere in the body of the article.

But beyond suggesting that Conference Baptists were mostly concerned with spiritual issues, I suspect the practice also reveals something about how the BGC saw its place in the world. In attempting to follow Jesus’ prayer in John 15 that Christians be “in but not of the world,” the Conference inhabited an intractable tension. For a conservative denomination like the BGC, to be evangelical — as opposed to fundamentalist — most often reduced to a stance of engagement with the broader culture. And this is what Conference Baptists sought to do by including current events in their articles. Yet that engagement could only come from within the safe bounds of a conservative theology and was further hampered by the fundamentalist-leaning wing of the denomination who saw any cultural engagement as sinful and ‘worldly.’

The result was a halting, hesitating participation in the events, concerns, and issues of the broader culture. As participants in broader society, Conference Baptists could share the joys and fears of ordinary people. But the tension remained, and such participation could not be sustained on the world’s terms; the discussion needed to be quickly re-centered on spiritual issues. Participation in the broader culture for its own sake was not enough — the broader culture needed to be pulled into the spiritual realm Conference Baptists were most comfortable with. There, Standard writers like Donald Anderson could safely allow a guarded admission of excitement for the successful moon landing while always preserving the primacy of God by asserting His superiority over the systems of the world:

While we may join with the world in heaping plaudits on the space industry, agreeing that the moon voyage was nothing short of fantastic, we still reserve the greatest praise for God who has done a lot more a lot better. 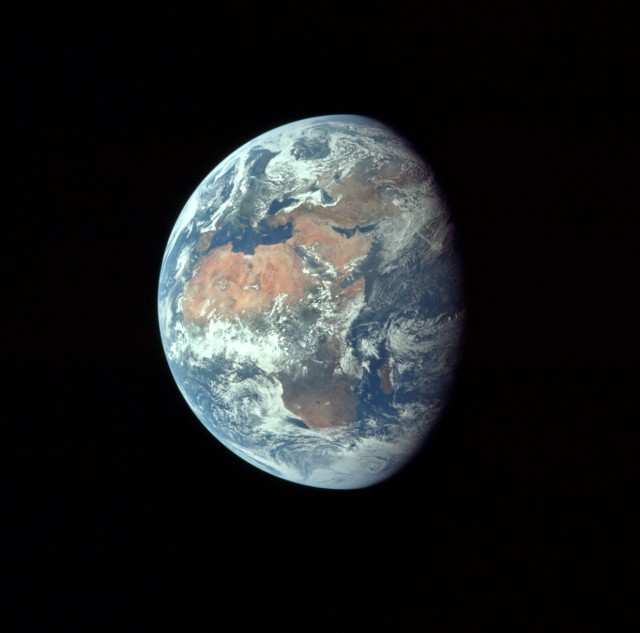 ← “We have among us very many Christian softies…”
Christians at War: Pacifism or Isolationism? →