Letters To (and From) Bethel: A Baptist Conscientious Objector

From late 1943 through the end of World War II, junior college dean Emery Johnson and other Bethel staff regularly wrote letters of greeting and encouragement to former Bethel students and the sons and daughters of Swedish Baptist General Conference churches serving in the military. Dozens wrote back, most to request copies of the denominational magazine, The Standard, and a few sustaining regular correspondence with Johnson for months or years. The file has become an invaluable resource for me as I seek to understand how the people of Bethel experienced and perceived the war.

(Bethel Academy A.J. Wingblade also tried to keep in touch with Bethel soldiers, sailors, and nurses during the First World War, but that’s a much smaller file.)

I’ve already quoted from a few of these letters in earlier posts (e.g., see my experiment with tweeting a visit to the archives) and on our draft timeline (see the year 1945 for a couple of examples). Others will no doubt find their way into the final website at various points. But for now, I thought I’d go ahead and start a series that shares some especially interesting, challenging, and often poignant excerpts from this correspondence.

I’ll start with an utterly fascinating exchange that serves as a kind of sequel to my posts exploring the limitations of pacifism at Bethel coming into the war, especially as it contrasted with the response of the country’s leading Mennonite schools to WWII. 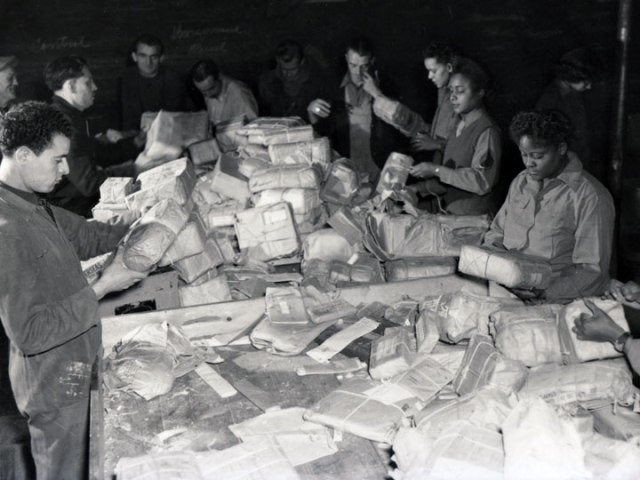 Late in 1943, Emery Johnson received a remarkable letter from Curtis Johnson (no relation, presumably — I’ll stick with first names to avoid confusion), who had received the Bethel dean’s Christmas greeting and decided “to correct the impression that you have that I am in the armed forces.” While Curtis had spent two years in ROTC at the University of Nebraska, that experience only left him

resolved that so long as life lasts, I would not permit myself to be enrolled in such an organization whose sole purpose is that of forcing a brother man to concede to our collective will, under penalty of death at our hands. The practice of war is, to put it but mildly, no more than government-sanctioned mass murder; and of course, one that has as his sole guide (poorly tho he may follow it) the example and teaching of such a one as Christ, finds it difficult to reconcile these entirely opposite behaviors in his thinking.

Curtis Johnson, it turned out, was one of the rare Americans who categorically refused to go to war in 1941-1945: “They label us variously — conscientious objectors – pacifists – conchies – C.O.’s, religious objectors — and others that shouldn’t be printed.” While Curtis was not among those “in prison for the heinous crime of refusing to kill our fellow-man,” he was one of the thousands who instead worked in the Civilian Public Service (CPS), “serving out the duration in manual-labor, without pay of any kind, for the same reason.” Curtis Johnson entered the CPS in June 1941. (Here’s his record at the Civilian Public Service Story website.) In late 1943, he was at CPS Camp No. 27 in northern Florida, where workers helped the state health board to combat hookworm.

The camp was run by the Brethren Service Committee and Mennonite Central Committee, but Curtis was a Baptist from Stromsburg, Nebraska (from 1886 to 1888, the home of what’s now Bethel Seminary). “As I understand it,” continued his letter to Emery Johnson, “the Baptists have no creed save the Bible, or particularly as the New Testament portrays Christ’s plan for the life of an individual.” It was for that reason that he refused to take human life:

You know, Mr. Johnson, Christ did set a tremendously difficult course for his followers to take. Suppose He were here now, walking along with you and me, suggesting to us a course of action in days such as these. Truthfully, can you conceive of Him giving His o.k. to your taking the life of some man, perhaps a German or a Japanese, some man that He died to save? Can you conceive of Him along side you in an airplane, dropping tons of explosive on helpless women and children, even tho your intention is to hit only munitions plants? Would He man the trigger on them occasionally for you, and show you how to do it more accurately? Did you ever try to imagine Commando Jesus Christ, private, first class, armed with every sort of knife, or club, or revolver, violently bringing the Kingdom of God here to men, and forcibly making them believe in Him as the all-powerful by physical process and military might?

Appealing in particular to the ethical implications of the Sermon on the Mount, Curtis challenged Emery to explain why the Prince of Peace would endorse a war fought by — and between — his followers:

Christ needs not a victory of the allies to make His Kingdom come to earth, nor does Christianity need to be protected by arms against its pseudo-foes — there are Christians in Japan by thousands upon thousands, millions in Europe — Why, oh WHY must we slaughter brother man — brothers in Christ? Is this the righteous cause — the privilege of serving country and God? God forbid.

Most of Emery Johnson’s letters in this file follow a template that he changed every month or two, with perhaps a few sentences customized to the correspondent. His January 13, 1944 response to Curtis Johnson is, however, completely original. Clearly the CPS worker had struck a nerve.

Emery affirmed both that “It is a great country in which we live which gives us the privilege of voicing our own convictions without fear of death” and that Baptists “have always maintained that freedom of conscience is fundamental, and have insisted that man be allowed to make his own interpretation of the Master’s teachings under the leadership of the Spirit.” However, those principles only underscored why Christians should take up arms in what, to his mind, was clearly a just war:

These are now two of the issues of this conflict. The youth of Europe have not been privileged to grow in the “strength of the Lord.” Nationalism, not love of God, has been made the religion of many countries. People have been robbed of the privileges of worshipping either as individuals or in the fellowship with others. Millions have been made slaves of war-mad dictators. Millions have died because possessions have been taken from them…their homes, their security, their opportunity to gain the necessities of life. For them we fight to restore them to a freedom which should be theirs as much as it is ours.

We love our enemies. We love those against whom we send our armies. We love not, however, their deeds and their beliefs. If the enemy should win would we not be denied all privilege of worship? Would not the missionary enterprises be completely stopped? Would not the institutions of love, orphanages, hospitals, homes for the aged, schools, be demolished and replaced by State-dictated institutions. Would not we be prevented from even objecting to war?

…Jesus did say, “Love your neighbor as yourself.” If then, my neighbor is in need I must go to his aid unless I myself believe that his state or condition is better than mine.