What Bethel Students in 2014 Thought about Bethel in 1914

On Monday we’ll be flying to London to begin our three-week travel course on the history of World War I. So don’t expect much from me here at this blog. (Not that I’ve exactly been prolific of late!) But before we go, I thought I’d share some thoughts from the students on our trip:

As a pre-trip assignment, I asked them to read through at least a couple of the WWI-related posts at this blog and then write a brief response.

More than one found it “easy to forget that Bethel existed at that time,” let alone that it had anything to do with the very war they’re going to Europe to study:

When I think of World War 1 I think of battle in a far off land and trench warfare,  not about how it affected our own country. (Hannah Zipoy – senior, Biology major)

To me the entire concept of Bethel students, faculty or alumni being connected to World War I at all is bizarre. When I think of this war it seems so far off in the past that it could not possibly be connected to my school or myself. (Jessica Ginter – junior, Elementary Education)

It seems when I think of WWI, because battle didn’t physically occur in our own country, it doesn’t seem real. It most certainly was, and the effects hit home here at Bethel and other colleges in the Twin Cities. (Zipoy)

Several students were drawn to the story of former student August Sundvall, the first of four members of Bethel’s community to perish in the war. While that wasn’t a huge number, the impact still hit home for junior Lauren Gannon (Media Production):

To think about completely losing four students, faculty and alumni in such a small community is huge. Today, I cannot imagine losing a student or faculty member whom I saw everyday in the halls, and the Bethel community has grown immensely since the early twentieth century.

In the end, what most students noticed was that Bethel in the WWI-era remained an immigrant community, populated by Swedish-Americans who tended to favor neutrality and were viewed with suspicion by their more xenophobic countrymen and women: 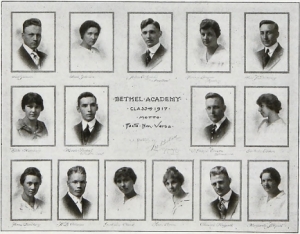 Of the fourteen students to graduate from Bethel Academy the spring that the United States entered World War I, five had been born in Sweden – Bethel University Digital Library

I had never made the connection before that WWI broke out at the tail end of a massive wave of American immigration. Obviously immigrants from European countries experienced the war in a much more personal way than native-born Americans…. (Elizabeth Hynes – junior, History/Social Studies Education)

It is just strange to think of any sort of suspicion being leveled at the Swedes, of all people. Especially in Minnesota, where it is almost assumed that any caucasian is at least partly descended from Swedish or Norwegian roots (and I suspect that most people would have a difficult time distinguishing between the different Scandinavian roots present in the population). Reading these articles forced me to consider a situation where the enemy in a War was remarkably similar in both appearance and culture to the majority of the people I associate with on a daily basis, which was an extremely strange thought to me (a sentiment that I feel would be shared by many of my peers). (Shane Dirks – senior, Physics/Philosophy)

What especially stood out to me was the level of nativism and xenophobia during WWI. Yet this discussion in many ways felt familiar. As a nation (and even at Bethel in classes, discussions, etc.) we are also still [grappling] with questions surrounding immigration and assimilation as we question what it means to be “American.” During wartime this conversation had a greater level of urgency, yet I think some of the same ideas behind “100 percentism” are still at play.

← Thoughts from an Iraq and Afghanistan War Veteran: A Bethel Adjunct Professor’s Perspective