While this project is a collaboration with Fletcher — indeed, it’s probably the most collaborative research project I’ve ever attempted — we’ll each take primary responsibility for two of the four wars in Bethel’s past century of warfare. Fletcher will handle the more recent history, focusing on the Vietnam War and the War on Terror. Which leaves me with two conflicts that I’ve studied all too often — though hardly at all through the lens of the Bethel experience…

I took a seminar on the First World War in grad school (writing a paper on how that war sparked early experiments in science fiction by British writers), but I didn’t really become a WWI buff until I inherited a sophomore-level class on that topic that had been a highlight of Bethel’s J-term for several years. As taught by my predecessor Neil Lettinga and his wife Virginia, studying the Great War became an occasion for students to memorize poetry, sing songs, and produce scale models of battlefields. (Or, in especially snowy Januaries, to dig temporary trenches on the Bethel campus.)

I taught in that mode on campus for several years, but starting in 2013, HIS230L became a travel course, with my colleague Sam Mulberry and me taking students to London, the former Western Front, Paris, and Munich for three intense weeks.

We’ll be back in Europe again in January 2015, but for this summer, I’m intrigued to delve more deeply into the American experience of the war by looking at how the war affected Bethel Seminary and, in particular, Bethel Academy. (As we explained in our first post, those two Swedish Baptist educational institutions merged the same year the war started, sharing a campus funded in part by a $10,000 gift from railroad baron James J. Hill.)

In addition to our overarching questions about how the people of Bethel experienced the war and dealt with (or evaded) the hard questions it posed for those who follow the Prince of Peace, I’d like to explore a few more narrow questions:

Interlude: Between the World Wars

This project isn’t meant to be a comprehensive chronicle of Bethel history for one hundred years, but to bridge the gap between November 11, 1918 and December 7, 1941, we’ll consider an important question from the interwar period:  Did isolationism or pacifism take hold at Bethel and in the Swedish Baptist General Conference, as they did in much of the rest of American society (especially in the Midwest)? 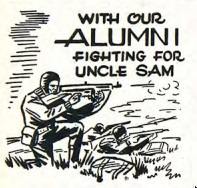 A regular section of Bethel’s student newspaper, The Clarion, during the years of World War II – Bethel University Digital Library

In the years that Sam and I don’t take students to Europe to learn about the First World War, I teach the history of its sequel on campus as HIS231L World War II.

I’m a bit more familiar with how the Second World War affected higher education in this country (and Germany — that was the subject of my dissertation), but I’m looking forward to digging deeper into the impact of the war on Bethel — which by 1941 consisted of a Junior College and Seminary collectively known as “Bethel Institute.” (Bethel Academy closed in 1936, five years after the College was born as a two-year program.)

A few key questions for this part of the project:

← Welcome to “Bethel at War”
Introductions: Vietnam and the War on Terror →