Letters To (and From) Bethel: The Crash of Ruin

Several months after World War II ended in Europe, a U.S. Army chaplain named Carl Bergstrom returned to that continent aboard a hospital ship bound for the southern Italian city of Naples. Invited to the bridge by the ship’s captain, Maj. Bergstrom looked through borrowed binoculars to take in “the mighty Vesuvius spewing out its smoke toward the sky.” As the vessel approached its destination, the chaplain saw more clearly how Naples, like most major European cities, had been devastated by the war:

…what a sight we were to behold. Everywhere in the once beautiful harbor we saw ships sunk that once had been mighty ocean liners and warcrafts from the little sub to cruiser. Our heavy bombers certainly had wrought destruction here. We weaved in and out between the wrecks until we landed side by side of a half sunken Italian luxury liner….

The entire water front is just shambles where once stood beautiful buildings. The bulldozers have done a good job in cleaning the streets. Barbed wires have been streched [sic] around the wrecked buildings and partially wrecked buildings. Not a pane in any window can be seen even though the natives still live among the ruins. 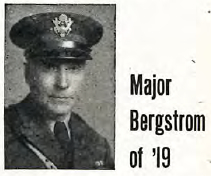 That’s how Bergstrom described the scene in a letter to Bethel president Henry Wingblade. (Read the first post in this series for context on such correspondence.) A Bethel graduate (Academy ’16, Seminary ’19) who had returned to his alma mater as Homecoming speaker in 1943, Bergstrom is the only alum I’ve found who served in both world wars.

It may be that someone who had seen so much of total war found it hard to be anything but ruthlessly practical, as when Bergstrom described how his ship “weaved in and out between the wrecks” until dropping anchor next to a “half sunken” luxury liner:

Our engineers had cut the railings of the upper deck on the starboard side and bridged the rest of the way to the harbor. It seems as the Americans are not interested in this war to make things look nice but only to get troops ashore and get the old war over with which is just to my liking…. I guess they figure to leave the natives to take the wrecks away when we the war in this part is over which is alright too with me.

But he was still sensitive to the human cost of the war:

The poverty among the people is appaling [sic]. The prices are high on everything. Bread costs 80 cents a loaf. Shoes the cheapest we saw were from $22.00 to $37.00 dollars [sic] a pair. The wage of the people here is $1.78 a day on the average. As we pulled in I saw a sight I shall never forget. The GI’s on KP threw the garbage overboard from the lunch they had the night before. At once dozens of men and boys with small nets were there to fish the stuff out of the dirty water. Halfeaten weiners [sic] were devoured even before they had a chance to dry them. The same was true with everything they could fish out with their long handled nets.

Starvation was a problem across WWII-era Europe. Earlier in the war, the Italian and German occupation of Greece resulted in tens of thousands of civilians (like these Athenians) starving to death — Athens National Museum

I often tell my students that Americans can remember WWII as a “Good War” in large part because they didn’t have to host it.

Few Italians look back fondly on those years, which began with a fascist dictator taking his country into an ill-advised military adventure that ultimately cost the lives of over 400,000 Italians. But if most Americans probably know the name of Mussolini, I suspect that few realize just how horribly civilians suffered once Italy became a theater of WWII in 1943.

It’s remarkable to see the levels of poverty and hunger prevailing even at the time of Bergstrom’s postwar visit. But had he visited Naples a year or two earlier, he would have seen even more appalling sights than men and boys fishing garbage out of the harbor to fill their bellies. (Or “beggars of all kinds and description” and “little bandit gangs here and there.”)

In November 1943 an editorial in Bethel’s student newspaper quoted a war correspondent’s description of visiting a Neapolitan hospital and finding two children with all four arms amputated. “There is one thing above all others that American parents (and you, too) should be thankful for,” concluded that journalist, “It’s that their children aren’t growing up in broken cities playing with booby traps and taking soldiers to their sisters.”

Sometimes the soldiers came for their mothers. In 1944, a British sergeant came across fellow troops on the outskirts of Naples. They had gathered around a group of Italian women possessing the

ordinary well-washed, respectable shopping and gossiping faces of working-class housewives. By the side of each woman stood a small pile of tins, and it soon became clear that it was possible to make love to any one of them in this very public place by adding another tin to the pile. The women kept absolutely still, they said nothing and their faces were as empty of expression as graven images. They might have been selling fish, except that this place lacked the excitement of a fish market. 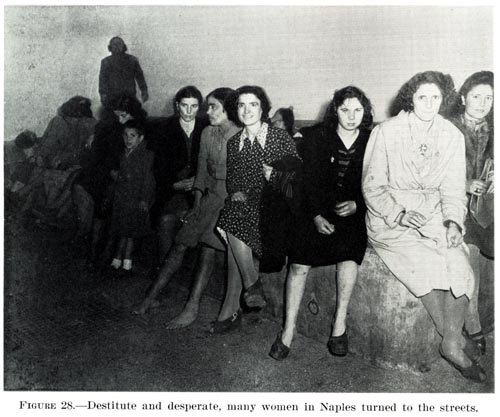 A few of the Neapolitan women who resorted to prostitution to feed their families in 1944 – Office of Medical History, U.S. Army Medical Department

Here I quote from Max Hastings’ excellent, troubling Inferno, in which he earlier shared the conclusion of one Australian journalist who spent time in wartime Italy:

Hunger governed all… We were witnessing the moral collapse of a people. They had no pride any more, or dignity. The animal struggle for existence governed everything. Food. That was the only thing that mattered. Food for the children. Food for yourself. Food at the cost of any debasement or depravity.

Though Bergstrom didn’t articulate any such judgments in his letter to Wingblade, many Americans who witnessed Europe’s “crash of ruin” came away convinced that “moral collapse” or something much like that was the appropriate description for the Old World — as Peter Schrijvers writes in his book on the GI experience:

…the GIs saw Europe at its worst. When they looked for food, they only found hunger. When they wanted to quench their thirst, they found alcohol more plentiful than water. When they set up aid stations, suffering people flocked to them for relief. When they took out their rations, hollow-eyed children gazed at them expectantly. When they flaunted their cigarettes, desperate women lined up to sell their bodies. The American soldiers thus emerged from the fog of battle with a picture of Europe as a world of immeasurable oppression, want, and immorality. That the conflict in Europe was a total war did much to strengthen that negative picture. (The Crash of Ruin: American Combat Soldiers in Europe during World War II, p. 190)

(And that will only feed the sense — widely held among Bethel folk and Conference Baptists — that war itself was a “missions field.” That’s already been a recurring theme for Fletcher in his series on the BGC and Vietnam, but I’ll take it up within the context of the world wars — and likely run into Major Bergstrom again — when I conclude my series on “Christians at War” next week.)

← A College’s Denomination: The BGC and the Vietnam War, 1970-1975 (Conclusion)
Christian Service Brigade →