Letters To (and From) Bethel: “Praise God for beauty in nature!”

Even a cursory glance at the letters, diaries, and memoirs of the American combat soldiers [in World War II] reveals that their view of the Old World focused first and foremost on the natural surroundings…. the GIs had a love-hate relationship with nature. 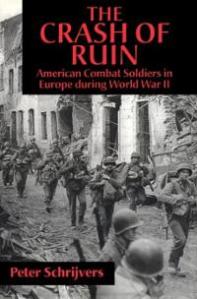 That’s the somewhat surprising start to the body of Peter Schrijvers’ illuminating book on the experience of American combat soldiers in WWII’s European theater. Not death or killing, wounds or pain, rubble or wreckage. Nature.

Indeed, with some important exceptions, most of the Americans’ war — in Europe or the Pacific — was fought away from cities and towns, out in the elements. So I wondered how that would show up as I read letters from Bethel and Baptist General Conference service men and women during World War II. (Read the first post in this series for context on these sources.)

So far, I’ve only come across two letters that describe natural settings in any detail. First, a sailor who had left Bethel Junior College after one semester to enter the Naval Reserve waxed poetic for his former dean as he described being deployed to the Pacific:

This was a thrill because it was the first time I had seen an ocean let alone to be traveling upon this huge body of beauty. With an natural [sic] ease many illustrations could be called to mind of the numerous ways in which the Grace of God is working for those that love Him from the sea. The starry heavens at night were in testimony of how men have been guided through the ages by the true light of the Star of Bethlehem — Beauty seemed actually personified, so great was its intensity and uniqueness, in those marvellous Pacific Sunsets. Praise God for beauty in nature! Praise Him for giving to me the quality to enjoy such beauty for it is purely through His Grace that this is so. I shall never forget the absolute grandeur of just such a sunset as we were coming into the harbor at New Caledonia. That huge fiery ball of red sending its golden flaming rays between the hilltops with the deep blue of the water in the foreground was simple [sic] enthralling.

Then months after V-E Day, an Army NCO dreaming of using the GI Bill to attend Bethel wrote to the school’s president about his visit to Adolf Hitler’s former retreat in Berchtesgaden:

The home itself is practically destroyed but we enjoyed going to the top of the mountain peak to the famous “Eagle’s Nest.” From the windows up there we saw some marvellous scenery including beautiful König See. The Alps Mountains are surely radiant in splendor reminding one once more of the beauty of God’s handiwork. 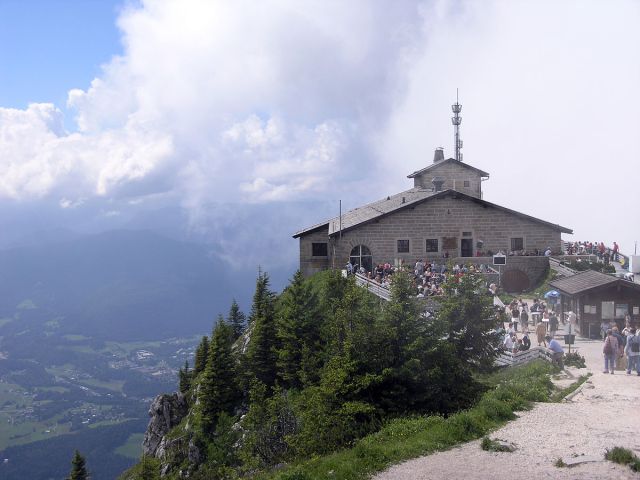 What’s striking is that these vistas are unspoiled by war. Schrijvers found that “whatever the circumstances, the GIs invariably interpreted nature in the context of the war,” which “cast a dark shadow over most of Europe’s natural beauty” (Crash of Ruin, pp. 3, 5. Schrijvers focused on Europe, but I suspect he’d find a similar theme if he turned to the Pacific, where soldiers’ experience of jungles and beaches was bound up ferocious violence, tropical disease, and what’s sometimes been described as the “de-civilizing” of moderns accustomed to the conventions and conveniences of urban, industrial societies.) But to this point, none of that has shown up in my review of Bethel/BGC soldiers, sailors, and nurses’ correspondence. 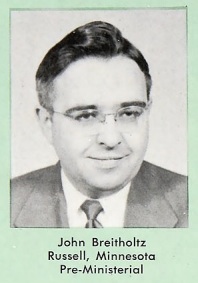 Incidentally, Breitholtz and Hedberg did attend Bethel after the war. Here’s Breitholtz’s 1951 yearbook photo as a college senior, bound for seminary. He went on to pastor Baptist churches in Brooklyn Center, MN and Ortonville, MN. Hedberg became Clarion editor and later Bethel’s director of publications.

For Hedberg and Breitholz, nature remained pristine. Its beauty was less “incongruous with war” than a shining reminder of the goodness of the Creator (“God’s handiwork”), still testifying to “how men have been guided through the ages by the true light of the Star of Bethlehem.”

Now, even among a roster of Baptists and other Christians for whom piety was public enough to share with Bethel administrators, these two enlisted men are unusual in the extent to which they spiritualize their experiences. Hedberg celebrates how his service in the Pacific had been “exceedingly profitable for me especially in spiritual growth and living” and avowed his desire to become a medical missionary. Breitholtz’s brief description of Berchtesgaden precedes a passionate confession of what he thinks to have been his religious shortcomings and a renewed statement of his purpose to attend Bethel and go into Christian work.

A second thing to keep in mind here is that the Bethel/BGC correspondence I’ve read — and let me underscore that I haven’t had time to attempt a thorough review of these files — generally presents a sanitized picture of the war. I’ve read no in-depth descriptions of battles, wounds, death, etc. Three chaplains’ letters are typical, in that they use nothing stronger than a euphemism to pass on their experiences of total warfare:

← ‘Accounting’ for Shoddiness: Professionalization at Bethel
Letters To (and From) Bethel: Chaplains as “Spiritual Pillars” →