Letters To (and From) Bethel: Chaplains as “Spiritual Pillars”

If there’s one thing I’ve learned from the letters sent back to Bethel during World War II by former students and members of its denomination who were serving in the military, it’s this: complaining about one’s pastor is as common in war as in peace.

I did attend both Protestant chapel services, and my first impression was that our chaplain thinks of Christ only as the originator or compiler of a new moral code and that he thinks anyone who lives a clean, moral life is a Christian in the fullest sense of that term, I hope I am mistaken.

I regret to say that I fear so many of our chaplains are not born again Christians and act more as diplomats than being on fire for God.

I’ve attended every service since I came here, but I’ve been disappointed each time, for the Chaplain just doesn’t seem to be able to give anything – it always ends up to be nothing more than a social talk – nothing is ever said about salvation or acceptance of Christ as Saviour instead he always refers to everyone as being a Christian – it’s rather disheartening to listen to anything like that when a person is looking for spiritual food.

November 1944 letter from a sailor stationed near Norfolk, Virginia

And these are from letters that, on the whole, paint a remarkably rosy — or at least unobjectionable — picture of military life. More than anything else — military discipline, food, disease, combat — it’s the quality of chaplains that inspires the rare complaints.

A Canadian chaplain conducts a funeral in Normandy, July 1944 – Library and Archives Canada

So what should we make of this theme? Three suggestions:

1. Most of all, that chaplains so often fell short in the eyes of Bethel/BGC soldiers, sailors, and nurses underscores the importance of that vocation.

These service men and women had extraordinarily high expectations of their chaplains — as did junior college dean Emery Johnson, as he affirmed in replying to a January 1945 note from Bethel’s most famous chaplain, Del Kuehl: “We follow with interest the work of our Chaplains, and we appreciate greatly the spiritual pillars who are holding up our Servicees in the many battlefields across the globe.”

And those who served as such “pillars” largely agreed. “[O]ne of the most important jobs to be found,” said one Bethel alum of his service as a chaplain in the last months of the war in the Pacific. “[It] is a great privilege to be able to give spiritual aid to the sick and wounded….” Another naval chaplain wrote to Johnson in March 1945 of tending to wounded men during amphibious landings at Lingayen Gulf: “…I had the glorious experience of placing the quivering hands of dying men in the strong hand of God. In the most dangerous and horrifying circumstances the Lord compensated the direst of human needs by an unusual reality of his presence.”

But among the people of Bethel and the (Swedish) Baptist General Conference, chaplains were to do more than offer care and comfort. If war was itself a “missions field” (to again tease a post that I keep putting off as I encounter more and more examples of the theme), then chaplains were in the vanguard as missionaries. Army chaplain Alrik Blomquist (S ’41) wrote to Johnson in early 1945 of the “privilege” of such evangelism:

The fields are white unto harvest, and we as laborers must work to ‘bring in the sheaves’ into the fold. Individuals are finding Christ and they testify of the change that comes over them, and they are not ashamed to stand up and let their comrades in arms know that Jesus is their Savior, and the [sic] urge others to find Peace with Him.

So pharmacist’s mate Perry Hedberg (the former and future Bethel student whom we met in my last post) simultaneously praised his chaplain in the New Hebrides and found the larger pool wanting:

He is absolutely and thoroughly a man of God who presents the Word of God with great evangelistic zeal. (To say that such a Chaplain in the U.S. Navy is ‘one in a hundred’ is a fact that we Americans must shamefacedly admit, yet, it is the truth.)

2. That Hedberg and others would complain that “modern” chaplains “have strange doctrines!” also suggests how insulated Conference Baptists were from the larger world of American Protestantism.

I won’t take Fletcher’s question of whether the BGC was evangelical or fundamentalist into the period of 1941-1945, but clearly, the authors of this correspondence overwhelmingly affirm the necessity of conversion and reject universal salvation.

(When historian Thomas Saylor later asked Del Kuehl what he said to comfort soldiers who were dying, the Bethel alum replied that it depended “on what they believe. I can never tell a man, ‘You’re going to heaven just because you’re dying,’ because that isn’t the truth. As I said before we went to Sicily, they don’t have to fear if they know Jesus Christ as their personal Savior because he died for them to forgive their sins…. But to somebody who doesn’t believe, who is agnostic, I could never…I could comfort them in their physical need, but I could not lie to them spiritually.”)

Hedberg, then, seemed surprised to find that Protestant chaplains would “preach and carry on a ministry in the name of Christianity that is much separated from The Truth,” even though the chief suppliers of military chaplains during the war were mainline denominations that were more theologically diverse than his own. Can it be that during Hedberg’s semester at Bethel, his required Bible course didn’t prepare him to encounter Protestants on the other side of the modernist-fundamentalist split? (To say nothing of Protestant/Catholic or Christian/non-Christian divides…)

(A quick note re: the BGC and the emergence of “neo-evangelicalism.” When the National Association of Evangelicals was founded in 1942, the leaders of the Swedish Baptist General Conference decided “to await developments before committing ourselves” by joining the organization. However, the first head of the NAE’s Washington office, which served in part to support evangelical chaplains during the war, was Clyde Taylor, then pastoring a BGC church in Boston. The BGC itself joined the NAE in 1966.)

3. I suspect that those who complained that chaplains “act more as diplomats than being on fire for God” failed to recognize how difficult it was to pastor an interdenominational, indeed interreligious flock.

As Lyle Dorsett explains, the military had trained its chaplains for ecumenism: 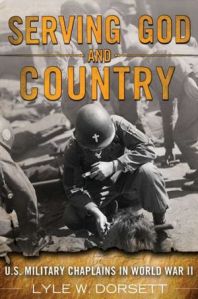 The armed forces knew that in many wartime circumstances all chaplains were going to have to minister to men and women outside their traditions. Consequently, they housed chaplain candidates so as to deliberately cause interaction. Rabbi Isaac Klein wrote that “whether by design or by sheer chance, each of the six men in my room was of another denomination. My roommates were Episcopal, Presbyterian, Christian Disciple, Baptist, and, probably by oversight, the only other rabbi in that class of a hundred and seventy”….

True friendships were forged among disparate faith groups at Harvard, Norfolk, and Williamsburg [locations of chaplain schools] as men roomed, ate, marched, and shared weekend passes together. Most chaplains not only gained comrades and an education, they were prepared to minister to men of all faiths and to look forward to a postwar era of more unity…. (Serving God and Country, pp. 34-35)

Indeed, one of the most interesting tidbits in the Bethel war correspondence file comes from Army chaplain Ernest Nelson (S ’27), who wrote from his post in England in September 1944 of preparing “for the New Year celebration—the Jewish [one].”

No one in the military command structure expected these men to conduct formal worship services that included all faith traditions. To be sure, chaplains were representatives of their own traditions. Nevertheless, they learned in chaplain  school to minister to all mean and women. This meant they must listen to problems, offer counsel, give encouragement, pray comfort for the wounded and dying, and bury each one in a dignified way. As the Army Chaplain Technical Manual phrased it: “The chaplain is the servant of God for all, and no narrow sectarian spirit should color his utterances, nor should his personal work assist only a special group.” (p. 35)

← Letters To (and From) Bethel: “Praise God for beauty in nature!”
A Rivalry Renewed? Bethel and the University of Chicago →