A Rivalry Renewed? Bethel and the University of Chicago

We’ve noted a few times here that 2014 is the 100th anniversary of the two events whose intersection gives this project a point of departure: In 1914 the modern age of warfare began with the onset of World War I; also that year, what’s now Bethel University made its permanent home in St. Paul, Minnesota when the Swedish Baptist Theological Seminary relocated here and merged with Bethel Academy.

Prior to that relocation, the Seminary had been the Swedish Department of the University of Chicago’s divinity school. So imagine my surprise when I looked at the regular season schedule for Bethel’s nationally-ranked Division III football team and saw that this October 18th it would be hosting a game against… You guessed it: the University of Chicago!

I so dearly want to believe that someone in our Athletics Department had a sense of institutional history and, seeing an open spot in the non-conference schedule, suggested that Bethel and the University of Chicago should mark the 100th anniversary of their rupture by playing football. (I’d propose that we play the game in memory of August Sundvall, the one-time Bethel Academy student who was studying at — yep — the University of Chicago when he joined the military and died in April 1918.)

But even if there are other reasons for this quirk of scheduling, it’s a good excuse to go beyond our project for a moment and recall the Bethel-U. Chicago relationship, drawing heavily on Norris Magnuson’s history of Bethel Seminary, Missionsskolan.

The present University of Chicago was actually an 1891 reboot of an earlier school by that name. During the Civil War, the original U. Chicago became host to a Baptist seminary. When its leaders learned that John Alexis Edgren, the new pastor of the city’s First Swedish Baptist Church, meant to start a seminary, they invited him to found it as the Swedish department of their school. Then in 1877 Edgren’s department joined the rest of the Baptist Theological Union in moving off campus, to Chicago’s Morgan Park neighborhood.

But for a variety of reasons (including Edgren’s embrace of premillennialism), tensions grew between the Baptist Theological Union and its Swedish partners, and Edgren attempted to make the renamed Swedish American Bible Seminary an independent institution — moving to a church in St. Paul, Minnesota in 1884 and then (as the Central Bible Seminary) to a new facility in Stromsburg, Nebraska in 1886. We needn’t get into the full story of the seminary’s brief but tumultuous stay in Nebraska (among other things, Edgren’s health failed and he resigned in 1887). Suffice it to say that it returned to Morgan Park as the Swedish Department of the Baptist Theological Union in 1888. 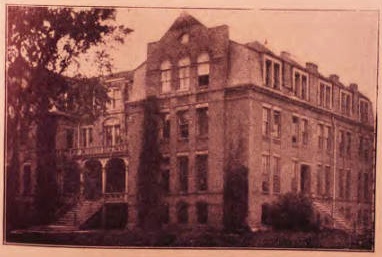 Meanwhile, the University of Chicago was bankrupt. But oil magnate (and Baptist Sunday School teacher) John D. Rockefeller agreed to give $1 million towards the revival of the school — on the condition that the Baptist Theological Union become the university’s divinity school. So the larger seminary returned to the University of Chicago campus in 1892 — but not the Swedish Department, whose faculty voted narrowly to remain in Morgan Park. While Edgren’s successor, C.G. Lagergren, was on good terms with the larger university, the Swedish Baptists wanted it to share more of the financial burden and to move their seminary’s “preparatory” classes into Bethel Academy. In 1910 the university proposed to separate the Scandinavian departments from the divinity school, and a year later the Baptist Theological Union’s board sought to merge the Swedish, Norwegian, and Danish departments and have all classes but preaching taught in English.

Even though the University of Chicago offered to rent space in Morgan Park for just $1 per year, some Swedish Baptists were resolved on relocating the seminary once again. The question of the school’s future fractured the 1912 annual meeting of the Swedish Baptist General Conference (meeting in Chicago), but a committee managed to develop a proposal for relocation that secured broad support the following year in Duluth. The Swedish Baptist Theological Seminary would return to St. Paul, to a new campus on Snelling Avenue, where it would merge with (and take the name of) Bethel Academy.

P.S. Football fans would no doubt want me to point out that — perhaps more importantly than its relationship with a small Scandinavian seminary — throughout this time period, the University of Chicago was an early college football powerhouse. Under the legendary coach Amos Alonzo Stagg, the Maroons won national titles in 1905 and 1913, and the university was a founding member of what became the Big Ten conference. In 1935 its star halfback, Jay Berwanger, became the first winner of the Heisman Trophy.

But four years later, the school dropped football — one of the many reforms inaugurated by new president Robert Maynard Hutchins, who took a dim view of the state of intercollegiate athletics (“In many colleges, it is possible for a boy to win 12 letters without learning how to write one”) and preferred to emphasize lifelong sports like golf and handball. But his call for an end to football was eased by the low quality of the last team, which lost 61-0 to Harvard and 85-0 to Michigan. (“The alumni were very upset with this string of totally humiliating defeats,” historian and U. Chicago dean John W. Boyer told the New York Times for a 2011 story, “though I expect the faculty were especially humiliated by being defeated by Harvard.”)

After Hutchins’ departure, the sport resumed at the club level. Football finally returned as a varsity sport in 1969, when U. Chicago played teams like the Wheaton College JV. It moved into Division III in 1973. After a long period of mediocrity, it has achieved respectability in recent years. (Last year’s defense allowed fewer than 15 points per game, fifteenth best in D3.)

← Letters To (and From) Bethel: Chaplains as “Spiritual Pillars”
Photographing Minnesota at War, 1941-1945 →