Christians at War: Retrospect and Prospect

It’s been a busy fall, too busy to permit for much Bethel at War blogging past sharing my reminiscences of 9/11/01 on 9/11/14. But as the Bethel of 2014 settles down for a few weeks, I’m ready to get back to the Bethel of 1917-18 and 1941-45. (Fletcher, meanwhile, is spending the term in Oxford. If he spends more than a few minutes before Christmas writing for this blog when he could be savoring his time in the UK, I’ll rescind the glowing recommendations I wrote him last month!)

But as I sat down to start writing again over the weekend, I realized that it’s not exactly easy to step back into that work flow after having interrupted it for two months. So I thought I might think aloud about where research has taken me so far on one of our central questions, and where I might head before we close the book on 2014. Hopefully this will be helpful for readers, too, especially if you weren’t reading along faithfully all summer.

In addition to asking how the people of Bethel have experienced four modern wars and how those conflicts have affected Bethel itself, Fletcher and I have posed a third, particularly complicated question: “During each conflict, how did people at Bethel understand and respond to the sometimes competing demands of national solidarity and Christian commitment?”

Neither of us is looking to leave behind our discipline for the realm of moral philosophy, but even if we steer clear of offering our own personal judgment on the ethics of Christian participation in war, this question takes us into muddy waters. As I noted in an earlier post:

…[to this point in the project] I’ve yet to show how the school’s administrators, faculty, students, or alumni grappled with the tensions seemingly inherent in followers of the Prince of Peace going to war.

Of course, Christians have offered many responses to this problem: from denying that the problem exists (and even claiming that God wills Christians to kill others for His good and holy purposes) to proclaiming that its only solution is total non-violence. It’s probably fair to say that the majority of Christians since the time of Augustine have joined that African church father in finding it at least occasionally justifiable, if always regrettable and likely sinful, to go to war during their temporary sojourn in a fallen world…

That post launched one of my ongoing series, spanning the two world wars but especially focused on the years before and during WWII. A quick recap of my posts so far in the Christians at War series:

Starting with a rare artifact of staunchly anti-war sentiment from a Bethel alum who was drafted at the end of WWI, did not serve, and then regretted having participated at all (“When one nation fights another both lose and both defeat the progress of righteousness,” he wrote the principal of Bethel Academy in 1920), I reviewed how American churches likewise exchanged jingoistic enthusiasm or internationalism, neutralism, and even pacifism during the Interwar Era. For example, in 1938 delegates to the Swedish Baptist churches that sponsored Bethel declared themselves “opposed to all wars of aggression, and state[d] as our conviction that civilized nations should find it possible to settle their national and international problems through the medium of Christian diplomacy and arbitration.”

But did such resolutions show that the Swedish Baptists had embraced Christian pacifism, or were they simply one expression of the America First isolationism that grew so powerful as war clouds gathered over Europe and Asia? More like the latter, I concluded pretty firmly: “What’s opposed here is not war of any sort, but specific kinds of war: those that are not defensive in nature and those fought beyond a nation’s own shores.” At the same time, it couldn’t be dismissed that influential leaders in the Swedish Baptist General Conference (if not at Bethel itself) not only opposed American entry in WWII right up to December 1941 but were drawn to the example of Anabaptist pacifists like Menno Simons.

But the “shallow roots” of that interest in Christian non-resistance “comes into starker relief when you look at the history of an actual ‘peace church’ and its colleges.” So I set Bethel to the side for one post in order to tell how Goshen College, the Mennonite flagship school in Indiana, and other “peace church” colleges responded to WWII. Not only did such schools reaffirm their commitment “to the way of life taught and exemplified by Jesus as a way of love to all men and ministry to all human needs” and their conscientious opposition “to participation in war in any form as a violation of that way of life,” but Goshen professors like Harold Bender and Guy Hershberger were prompted by WWII to spark a neo-Anabaptist revival that had as a pillar “the ethic of love and nonresistance.”

(As part of a separate series, featuring correspondence from 1943-1945 between Bethel administrators and former Bethel students or members of BGC churches, I told the story of a rare Conference Baptist who joined Mennonite and Brethren conscientious objectors in refusing to serve in the military. “Why, oh WHY,” he asked the dean of Bethel Junior College, “must we slaughter brother man — brothers in Christ? Is this the righteous cause — the privilege of serving country and God? God forbid.”)

The “Moral Welfare” of Soldiers

But if the people of Bethel and its denomination did not typically raise a religious or other conscientious objection to killing in battle, they did demonstrate a different kind of reticence to take part in America’s wars. Baptists who placed a great deal of emphasis on the need for individual believers to grow in personal holiness found much to dread about sending their sons and daughters anywhere near military camps notorious for their licentiousness. I particularly focused on WWI-era concern (far broader than this one ethnic-religious enclave) about alcoholism and prostitution, but found that the same issues revived in the Second World War, during which Michigan delegates to the 1943 BGC meeting warned that American servicemen and women were being “subjected to conditions which are not conducive to spiritual growth and moral stability.” 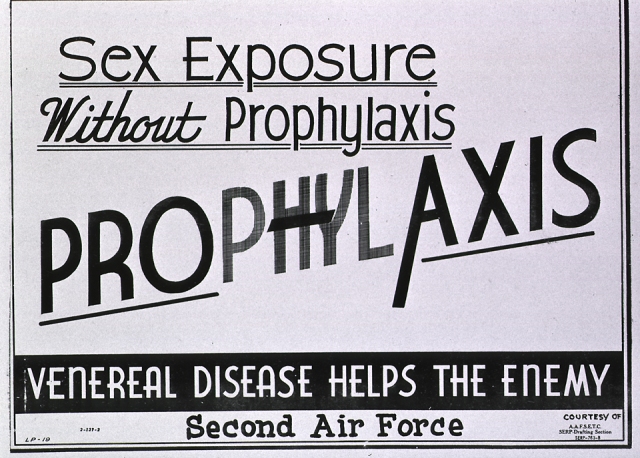 The US military tended to be less moralistic than pragmatic about these concerns, as seen in this 1944 Air Force poster – U.S. National Library of Medicine

This series could, of course, go on and on. The issues are that complicated and the evidence is rather abundant. But I imagine writing two more posts:

First, I’ll turn to Gerald Sittser’s argument that most American denominations approached World War II in a spirit of “cautious patriotism,” which let them “rally their resources to fight the war on the side of the allies and yet maintain biblical fidelity and spiritual integrity… to minister to the needs of the nation, but not at the expense of their commitment to justice and peace.”

Did “cautious patriotism” describe the (Swedish) Baptist General Conference (the ethnic modifier disappeared in 1945) or its college and seminary? That question is foremost in my mind as I continue to read the wartime runs of two publications: The Standard, the BGC’s weekly magazine; and The Clarion, the student newspaper of Bethel Institute.

At this point, I have two hypotheses:

War as a “Missions Field”

So, above all, I find that the Baptists we’re encountering hoped to redeem total war by treating such conflicts as extensions of the missions field, with military service offering unparalleled opportunities for evangelism. On the one hand, this may have led them to spiritualize suffering with statements that can seem naive at best, callous or cynical at worst. But the Baptist commitment to world missions may also have tempered any impulse towards American exceptionalism and sustained hope that God was still at work even in the most tragic chapters in human history.

But again, these are just initial impressions — please feel free to suggest corrections or modifications in the comments section. I’ll check back in a week or two as my research continues and the two envisioned posts take shape.

← Our Most Popular Posts
Following Up: Bethel’s First War Casualty →